We are demo-ing two empowering android apps on the play store, the ToneDeafTool and ImmersianAssistantPrototype. Cool!!

When approaching big challenges, it's important to zoom out and assess all possible paths. We determined there were two basic dichotomies of effort towards #SystemChange, where you start, and how you grow: 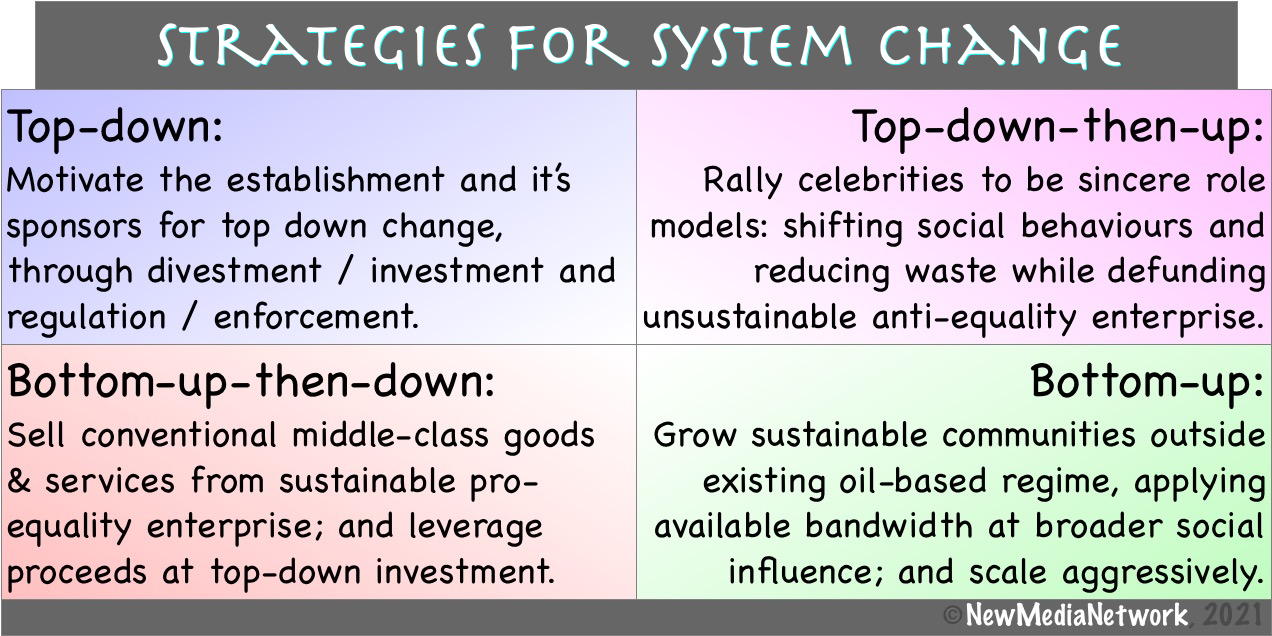 We reviewed mainstream media's assessment of our ecologic challenges, to an optimistic-but-disturbing result. It's simply not that costly to solve our problems, relative to global GDP, and relative to the personal "wealth" profiles of different class groups. This determination validated the #DinosUnite approach -- if only we humans would work together, this would not be hard! 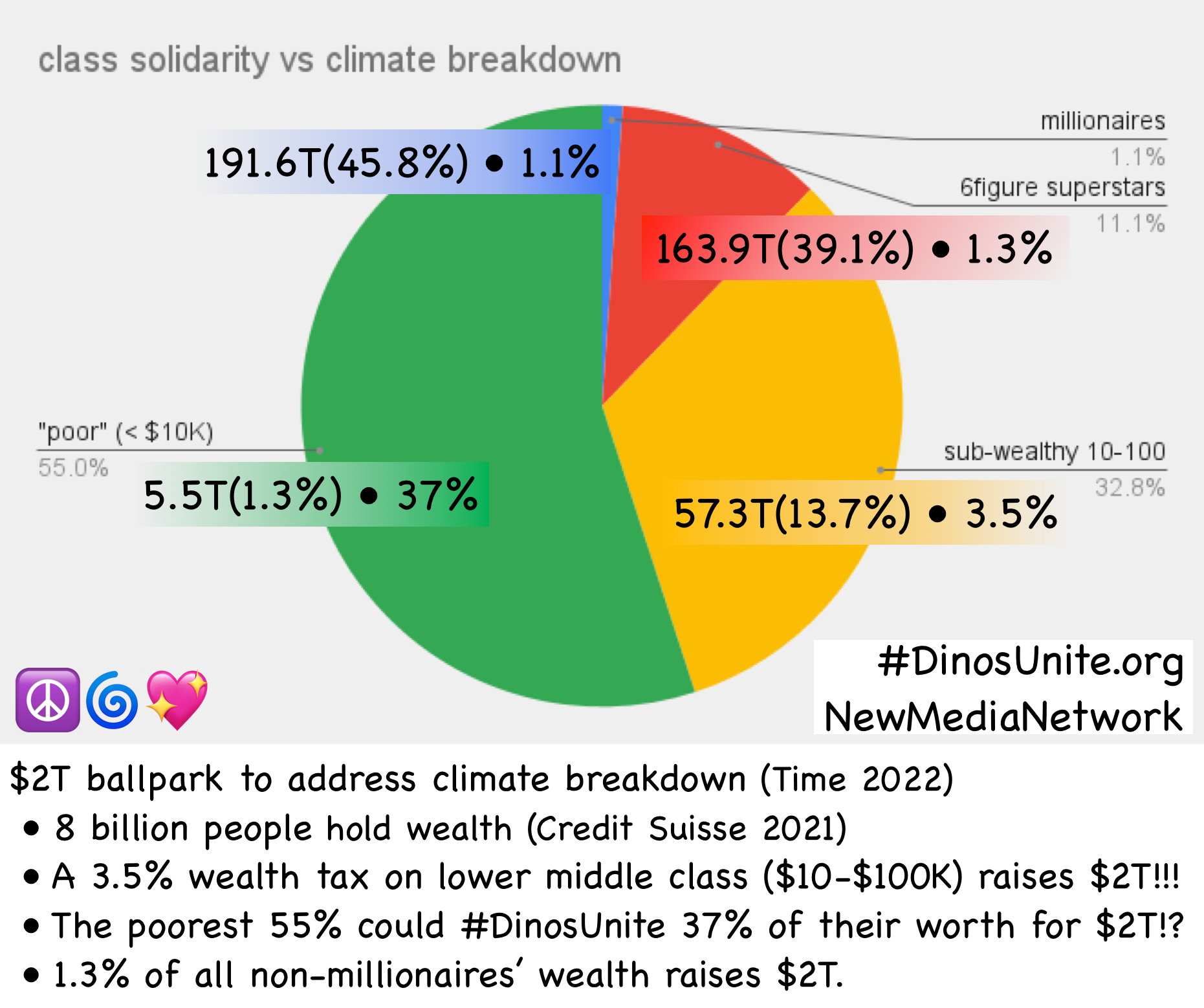 When we focus on the necessity of "winning", it became obvious that there were many possible ways to move the needle. We found this analysis both validating and encouraging, since we could reasonable expect everyone to engage in some way (while juggling traditional demands of life within their culture). 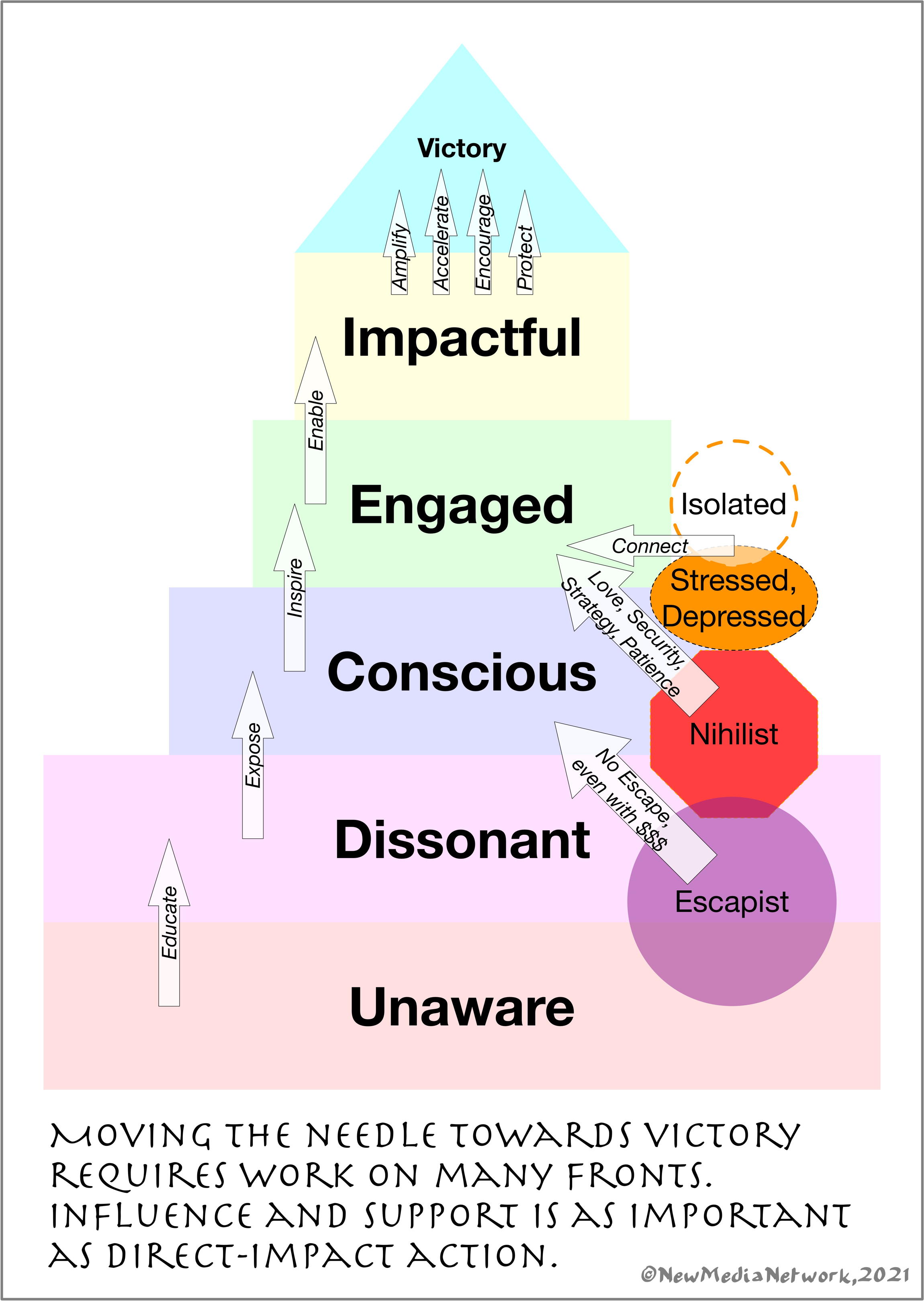 With the above analysis, we were very frustrated with how hard it was to actually move the needle. What was in the way? The nefarious enemy..... colonization.... has invaded our communities, beliefs, and bodies around consumption and escapism. But could there be another way??? We better hope so! 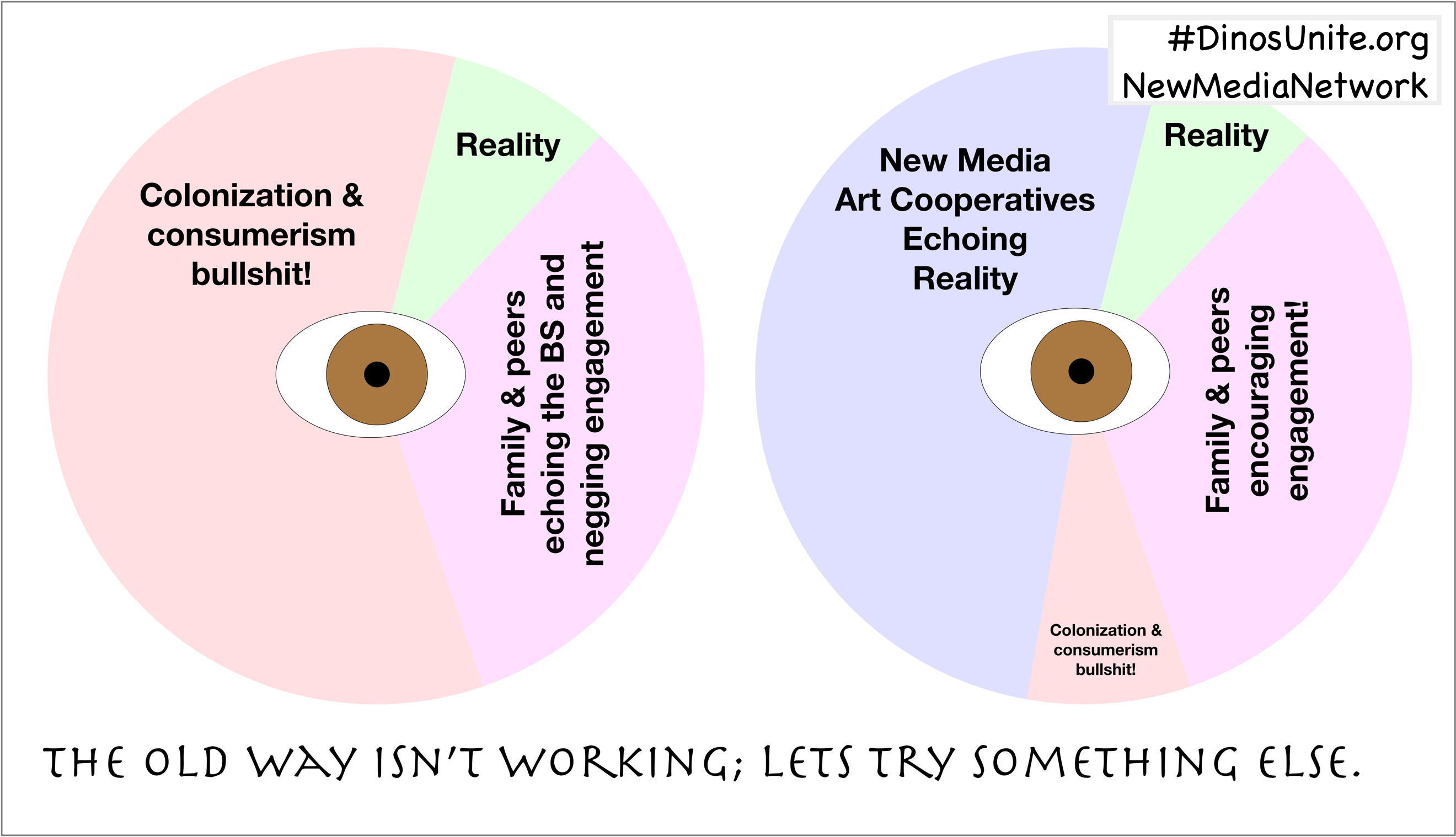 We found through personal experience how hard it was to progress in isolation, but that through connections we could always find some way to progress (Connection Is Incubation). The second graphic depicts the difficult narrative we experienced, and heard from others (Facing and Acting vs Climate and Inequality). We identified a key obstacle to success: supporting would-be activists through difficult solo processes such as personal growth, affinity group formation, and direct actions. #Together #WeCanWin! 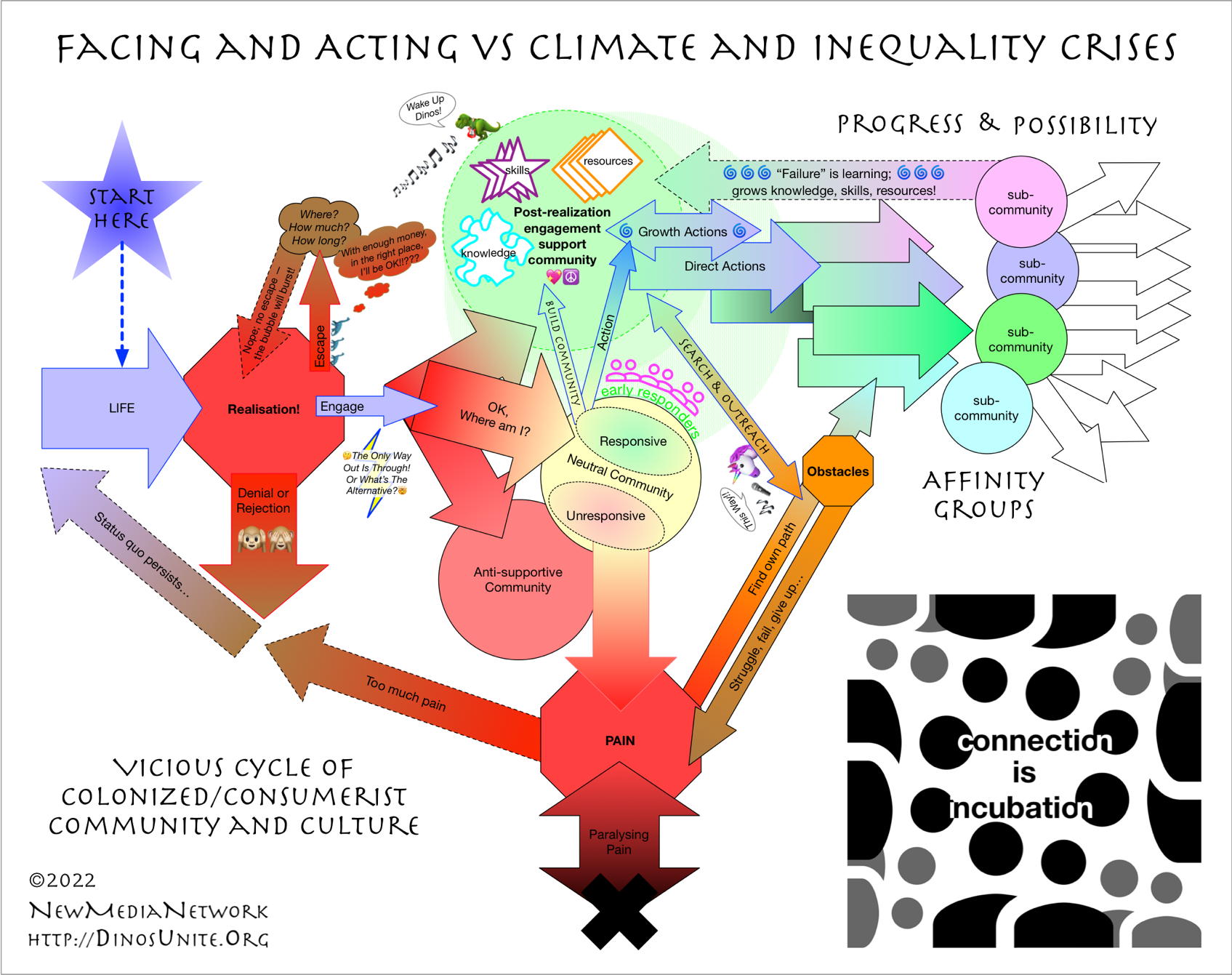 Despite all the science, money, and necessity, ... we somehow still face a seemingly impossible mission. In the depths of 2020 (covid-19) isolation, we struggled to stay motivated. We clearly did not have the skills we needed, but by trying (incrementally), by learning (incrementally), by growing (incrementally), anything is possible! The value of personal growth was subsequently validated by other organizations, such as the Inner Development Goals. We still don't know just how our ecologic and equality crises will unfold, but we can none-the-less prepare ourselves with knowledge and skills relevant to amelioriation and recovery. 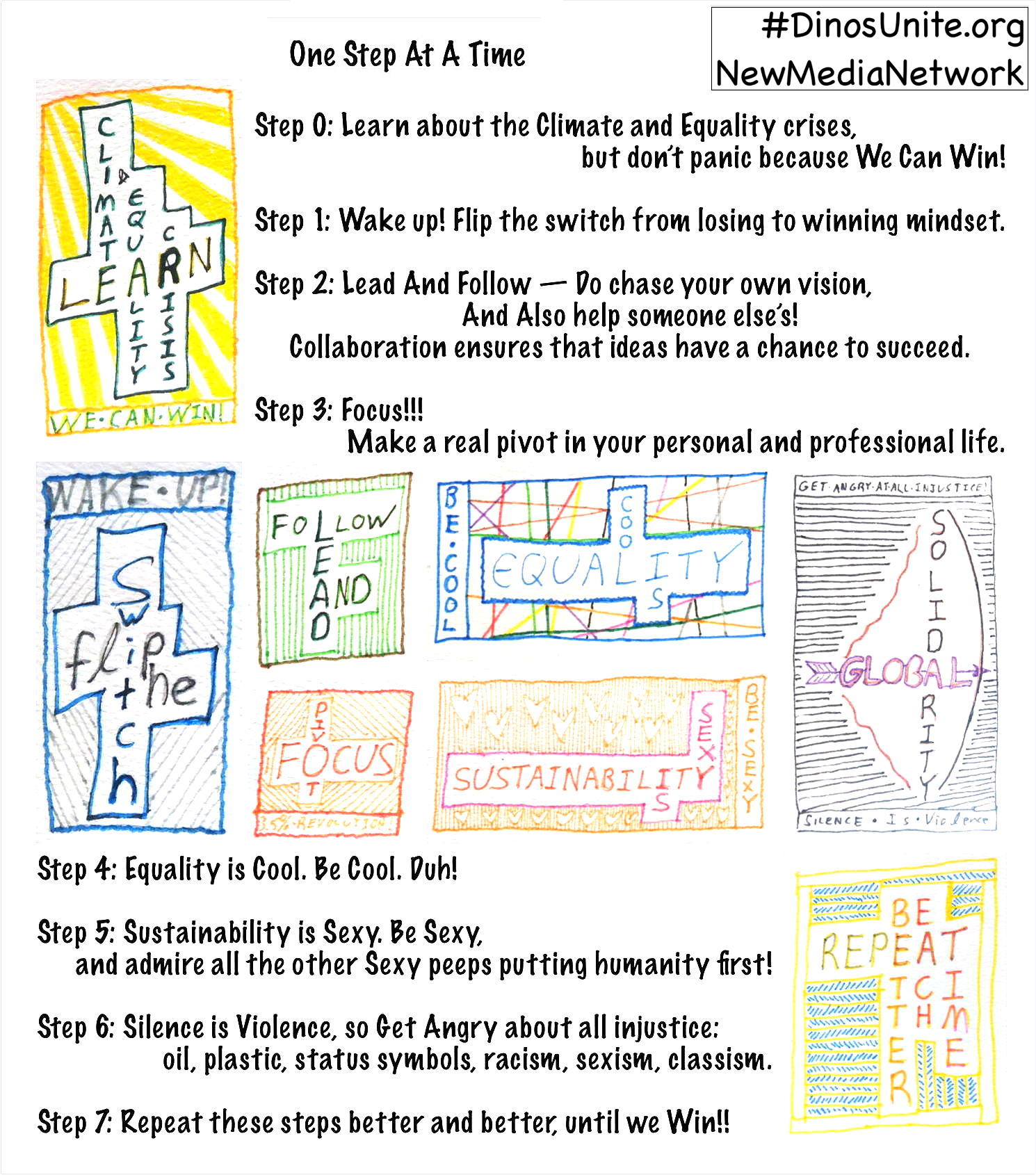 There may be many solutions to our crises, but here is one. While some might refute the possibility of humanity working together at this scale, we believe that most of humanity is in fact already living in community culture. "Mutual-aid" is normal in many indigenous cultures; it has even mixed into the western world through "remittances" (in 2022, more than $600 billion). In #DinosUnite, the musical, the dinosaurs realize they must all work together for each other, rather than performatively for the dominant REXocracy.... Or We Go Extinct! 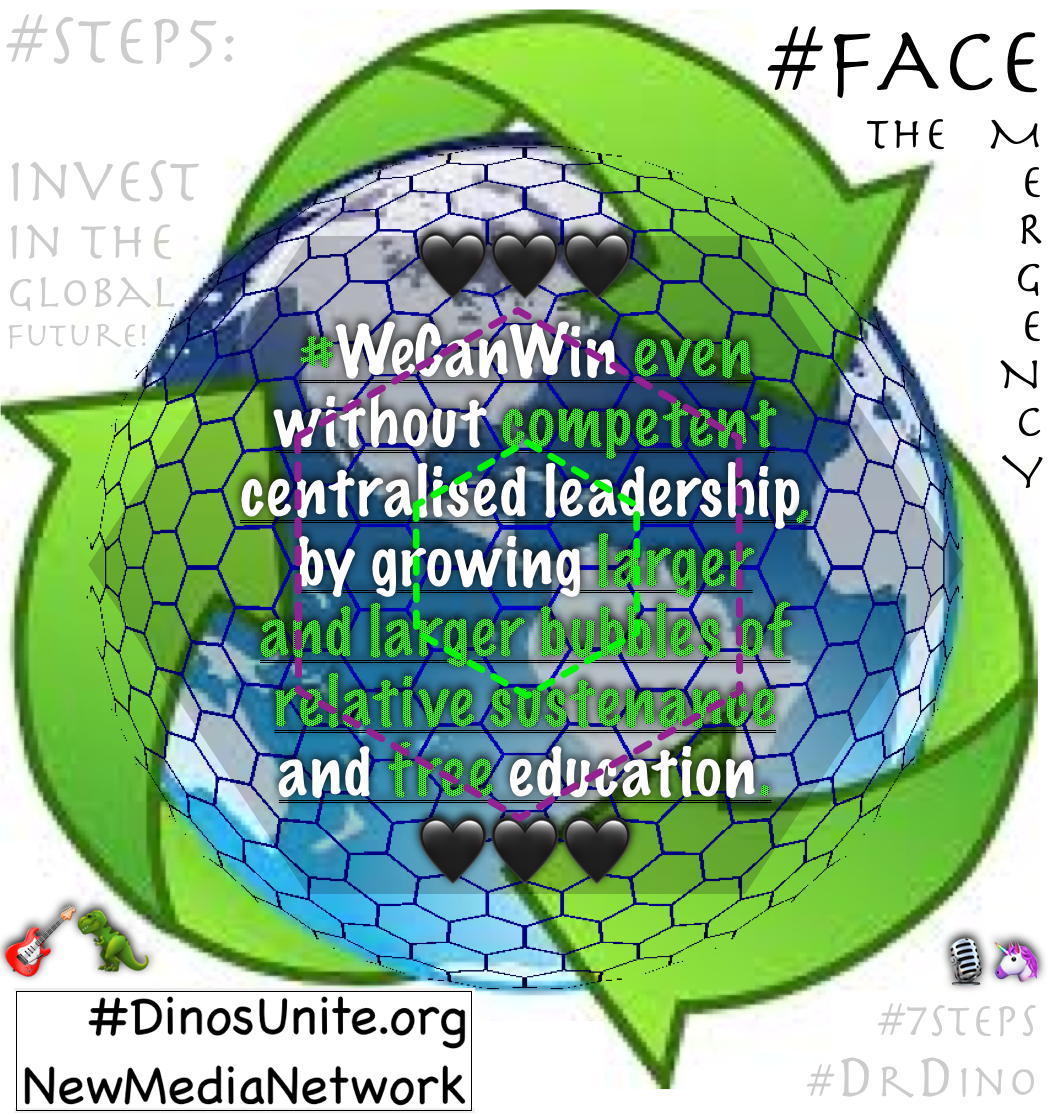